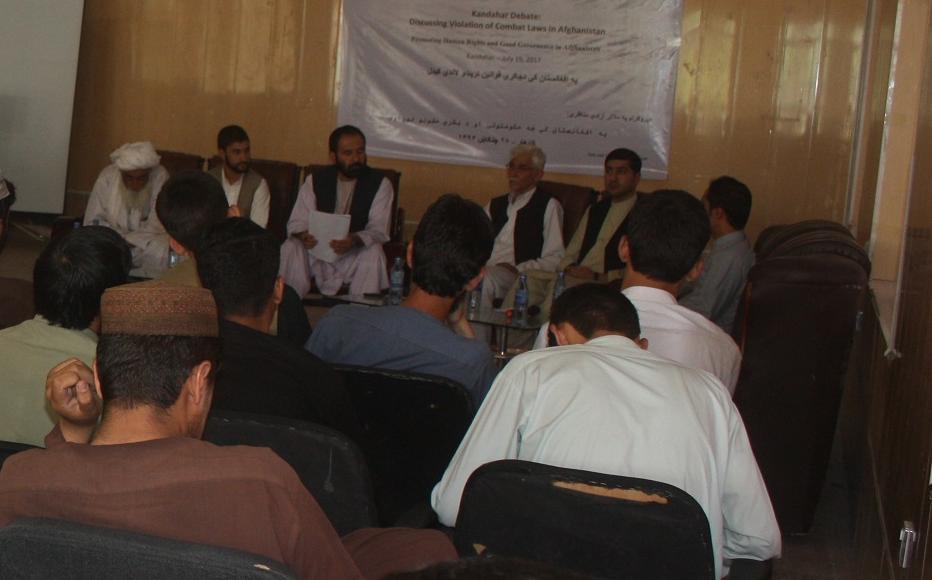 Afghanistan: All Sides Violating Human Rights
The link has been copied

All parties to ongoing fighting in southern Afghanistan are violating the rules of war, according to speakers at an IWPR debate in Kandahar this month.

Government forces and the Taleban alike were causing civilian casualties through the use of human shields, heavy weaponry and targeted killings. An audience of more than 100 men and women also heard how the daily lives of those caught up in the fighting were being disrupted by the widespread use of roadblocks and seizure of private property.

Jawed Ahmad Tanweer, the director of the Kandahar press club, told the July 19 that journalists had reported multiple violations by both the armed forces and the insurgents in Kandahar, Zabul, Uruzgan, Helmand and other southern provinces.

He added that reporters in the south had also warned that both sides were using civilians as human shields.

"We have photos and videos documenting reports about cases in which the laws of the war have been violated," he said.

Tanweer also noted dangers to press freedom, reporting that a number of senior security officials refused to allow journalists access in the combat zone so as to hide their illegal actions.

Although he declined to provide any names, he said that certain high-ranking figures had also threatened journalists.

"Reporters have the right to accompany the security forces and report from the frontline, but the officials prevent them," he said.

Military expert Mohammad Hamdard said that both parties to the conflict were ignorant of the principles of the war and of basic human rights.

"Not only are the fighters unaware of the principles of war but also the security officials on the frontline are not professional and known nothing about such matters," he said, adding that these norms could only be maintained when perpetrators were punished. Instead, those who violated the rules of war were promoted and awarded privileges.

Hazrat Wali Hotak, the director of information and culture in Kandahar, noted that night raids and bombings carried out by the US or with American support in Kandahar, Helmand, and Uruzgan provinces were particularly egregious.

The insurgents were also guilty of flagrant abuses, he continued.

"The militants not only plant mines but also use civilian houses for their bases," Hotak said, calling for all those who committed violations to be prosecuted.

He acknowledged that the government was not without fault, too, noting that former warlords had been promoted to positions of power.

"Our government and system is made of war criminals,” he said. “Those who caused a civil war here cannot be expected to respect the principles of war."

"We produced two reports about transitional justice,” he continued. “We identified the criminals and asked for them to be punished, but the government has taken no practical action against them. It seems that the government does not have the power to stand up to them."

Kandahar religious scholar, Mawlawi Abdul Ghani, said that Islamic provisions were explicit about the protection of civilian life during conflict.

The prophet Mohammed, he explained had acted very cautiously during wars and treated prisoners and civilians very sensitively.

"The current situation, where civilians are harmed, where mines are planted on roads, and one Muslim is killed by another in the name of jihad, is not acceptable in Islam. Allah has not given us permission to ever kill innocent people."