Ten Years on From Revolution, Tunisia in Uncharted Waters

Many Tunisians are disillusioned with the entire political system and the democratic process.

Ten Years on From Revolution, Tunisia in Uncharted Waters

Many Tunisians are disillusioned with the entire political system and the democratic process. 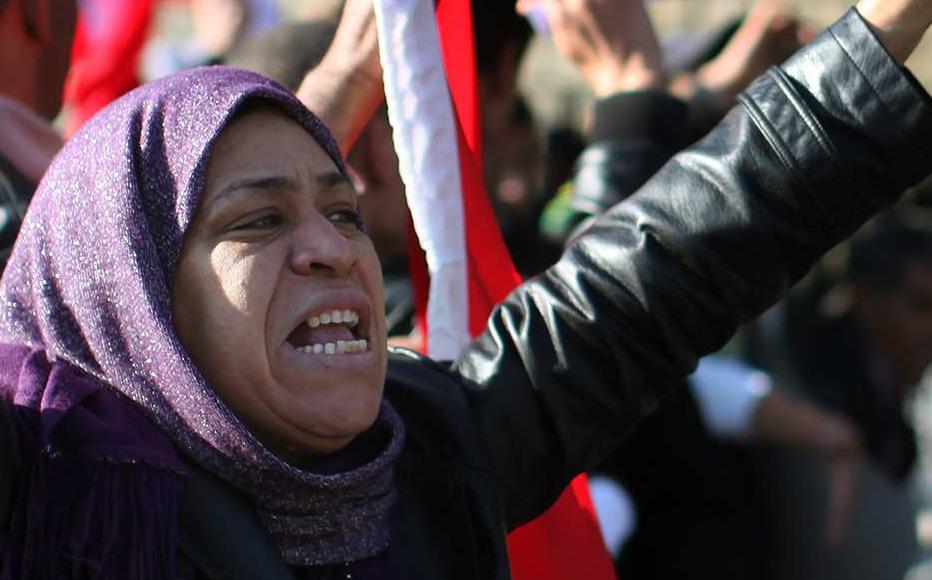 Protesters from Sidi Bouzid, the town where the Jasmine Revolution started and later led to the ousting of longtime president Zine El Abidine Ben Ali in January 2011. © Christopher Furlong/Getty Images
The link has been copied

Tunisia’s president Kais Saied has propelled the country into the unknown. On July 25, he announced he would dismiss the prime minister, suspend parliament and assume new powers, effectively concentrating all three branches of governance in his hands.

His actions were met with mass celebrations across the country, even as the military moved to lock down parliament and a number of state institutions. Simultaneously, the dominant political party Ennahda and its allies accused the president of orchestrating a coup.

In a televised speech, the president pointed to the government’s failed response to the coronavirus pandemic, rampant political corruption and a decade of deeply weakened state institutions and the rule of law.

Indeed, the country is reeling from its worst wave of Covid-19 yet, amid a pandemic that has eviscerated the tourism industry, which once accounted for a tenth of an economy and is now teetering towards collapse. In April the World Bank recorded a real GDP contraction of 8.8 per cent since 2020, and estimated that almost a quarter of businesses have temporarily or permanently closed - most in the service sector – with unemployment having risen to 17.4 per cent from 14.9 per cent by the end of 2020.

But Tunisia’s economic woes long predated the pandemic. Inequality and rampant unemployment were the among main factors behind the 2011 protests that launched the Arab Spring, sparking a series of revolutions across the Middle East and North Africa region. Ten years – and as many governments – later, Tunisia’s political class have repeatedly failed to address the root causes of Tunisia’s troubles or introduce the much-needed reforms demanded by international donors.

This has left many Tunisians disillusioned with the entire political system, its players and the democratic process. This has been exacerbated by a perception of endemic corruption and a decade of political fragmentation that meant that the country’s most dominant party struggled to hold a quarter of seats in parliament. Amid all this came the rise, also, of ultra-conservative forces and counter-revolutionary currents.

Saied, a former constitutional law professor, won a landslide in the 2019 presidential race after campaigning for a break from the system.  His speeches have been consistently filled with vague promises of a “historic moment yet to come” with significant reference to unnamed, malicious actors weakening the legitimacy of state institutions and rule of law.

With the “historic moment” finally arriving, it calls to mind his earlier political thoughts on the election campaign trail, including on direct democracy, the importance of decentralisation and rejection of the party politics that have defined post-revolution Tunisia. But his vision of a renewed political system remains unclear.

Calls for the dissolution of parliament – and even proposals for invoking Article 80 – began to capture public debate as early as mid-2020. Tunisians watched an inefficient legislature embroil itself in successive political crises, and according to a recent local poll, 87 per cent of citizens approved of the exceptional measures. Popular perception seems to hail him as the lone figure in politics who has delivered on his core promises.

This popularity, correlating with the sharp loss of parliament’s legitimacy, suggest he will have a wide degree of latitude in whatever actions he does take, especially in the first 30 days as per Article 80. Condemnation from foreign governments appear to have simply rallied domestic support around Saied further.

Thus far, he has made it a priority to consult with prominent civil society organisations, which could be a positive sign for donors and concerned governments - but there are also signals embedded within presidential statements that hint the 30-day period could be extended. Civil society leaders will face difficult choices if such extensions repeat or appear to grow indefinite, or if rights and freedoms are widely restricted.

Another critical actor to watch is the country’s military and security sector. The army, traditionally regarded as apolitical, has thus far moved to enact the president’s orders but has operated with restraint. Key among Saied’s staffing shuffles in the days after July 25 (ordinarily the prerogative of the prime minister) have been security officials. This can be seen as a move to broaden presidential authority well beyond foreign policy and defence, reaching into internal security, counterterrorism, and policing.

Saied’s intentions regarding the security sector - which resisted a number of key reforms even at the height of the revolution - will almost certainly have implications on the future human rights landscape. While he was quick to offer public guarantees that he would uphold rights and freedoms, police actions taken since July 25 include the shutting down of Al Jazeera’ Tunis office, several prominent political arrests and instances of brief detention of activists and journalists.

One of the first ripple effects of the July 25 events stemmed from the president’s removal of parliamentary immunity from prosecution. This prompted the re-activation of several high-profile probes into corruption, announced and directed by the judiciary but clearly encouraged by the lifting of immunity. A few notable arrests took place, including of one lawmaker well-known for his criticism of the military, but these cases remain isolated.

Nonetheless, there are widespread expectations that more expansive probes could quickly lead to the arrest of many political figures. Local and international press have suggested that Ennahda could be a particular focus, but it is important to note that actions taken since July 25 do not suggest a scapegoating of the Islamist party. More broadly, it is important to note that Tunisian politics have evolved considerably beyond characterisations of “secularist vs. Islamist” that defined the early years after the revolution.

While the potential for state-imposed restrictions is worrying, there is an under-reported, pre-existing atmosphere of hostility toward rights activists and the media among segments of society that could escalate under a period of political uncertainty. A wave of grassroots animosity toward social progressives and alternative voices (impacting LGBTQ individuals particularly) has manifested in public and online harassment and even local-level police action.

What is also uncertain is what direction Saied’s efforts may now take, or how effectively he might implement more radical changes to the political order. As a political outsider he does not lead a formal party or draw on the resources of an organised movement.

International (and some domestic) pressure appears aimed at pushing the president into a roadmap that would swiftly reinstate a measure of checks and balances, including the legislature. But given the profile of the president and the huge popularity of his power grab, no amount of pressure is likely to bring about a return to a pre-July 25 status quo.

Asma Ajroudi works in media development in Tunisia, and is a researcher and former journalist who has covered politics and social movements in half a dozen countries in the Middle East and North Africa region.

This reporting is made possible by the Marie Colvin Journalists' Network mariecolvinnetwork.org, an online community of Arab female journalists.

Tunisia
Democracy, Protests
Connect with us