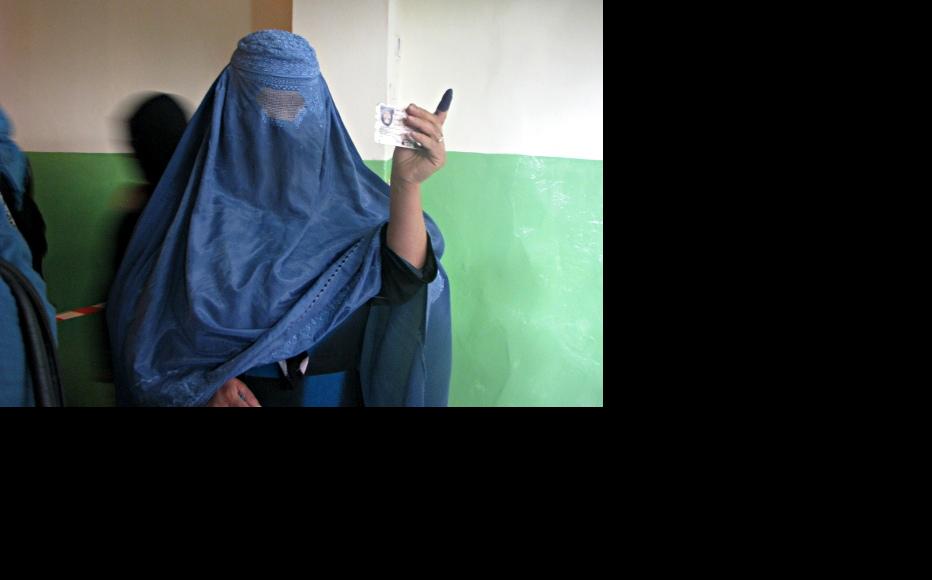 A female voter holds up a finger with ink on it showing she has voted, and preventing her from doing so again. (Photo: IWPR Afghanistan) 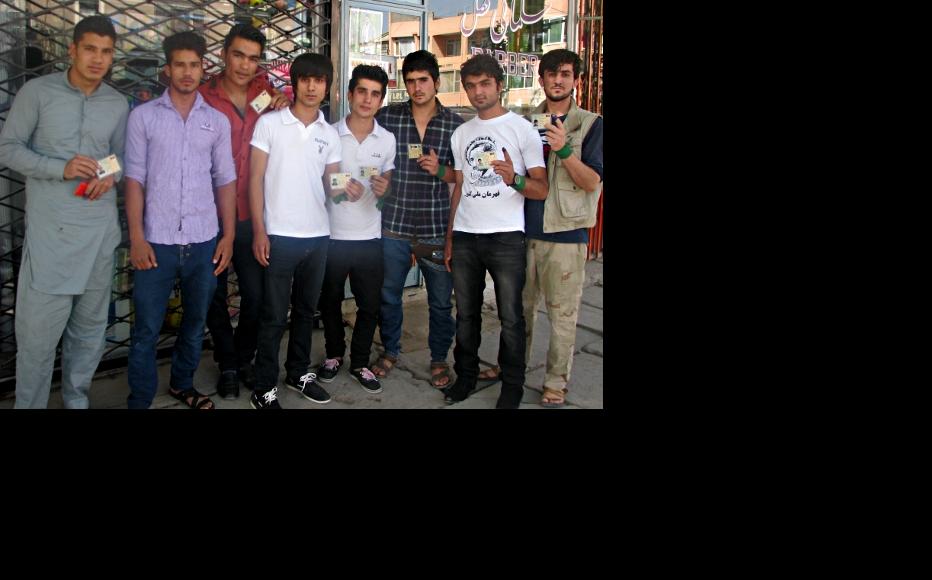 Voters with their ID cards. (Photo: IWPR Afghanistan)
The link has been copied

Afghanistan’s presidential run-off election followed a similar pattern to the first round – reports of high turnout and relatively good security, but claims of electoral fraud, too.

Ahmad Yusuf Nuristani, chairman of the Independent Election Commission (IEC) told a press conference that over seven million voters took part, 38 per cent of them women. This early estimate would, if confirmed, be similar to the 60 per cent turnout recorded in the first round.

Nuristani said the fact that the election was run and policed by Afghans “increased the credibility of the process” at home and abroad.

Officials hailed the day as a historic success.

Casting his vote, outgoing president Hamed Karzai predicted that Afghans would “come out and rescue [their] land from its need for foreigners, and from destruction”.

Rahmatullah Nabil, who heads Afghanistan’s intelligence service, the National Directorate of Security, described the day as a momentous accomplishment, and a defeat for the Taleban.

“Even if the enemy still has a physical presence, it must realise it has been eliminated morally,” he told reporters.

Nabil said his agency had carried out over 60 counter-terrorism operations in the past ten days, and foiled “73 enemy plots”.

The high turnout seen on April 5 was attributed in large part to the Afghan security forces’ success in preventing insurgent attacks, although that vote was marred by complaints about polling stations running out of ballot papers as well as allegations of electoral fraud.

Fahim Naimi, spokesman for the Free and Fair Election Foundation of Afghanistan (FEFA), a leading poll monitoring group, said the failings of the first round was repeated in the second.

Live television broadcasts tracked progress across the country from the moment voting began at seven in the morning. By mid-morning, there were already reports that ballot-papers had run out at polling stations in a number of provinces and even in the capital Kabul

“As in the first round, most polling stations opened late,” Naimi said. “There was a shortage of ballot papers. Observers weren’t allowed to enter premises to watch. Fraud was committed in various ways. Reports by our observers also indicate that force was used in some cases.”

He said FEFA had not yet completed its investigations, but would issue a final report with its findings in due course.

After polls closed, both candidates asked the IEC to deliver a fair result when preliminary figures were announced on July 2.

Abdullah, who won 45 per cent in the April election, told a Kabul press conference that this would guarantee the success of Afghanistan’s future leadership.

“Ensuring election transparency is an obligation for the IEC and the Independent Electoral Complaints Commission,” he said. “Transparency and legality will increase public confidence in the democratic process, and in these commissions.”

Ashraf Ghani, who came second in April with 32 per cent of the vote, made similar comments.

“It is now the IEC’s duty to count the votes responsibly, and to reveal the results to the people responsibly,” he told reporters.

IEC head Nuristani thanked the Afghan security forces, media and civil society groups for the respective contributions to the election, but noted that allegations of interference had been made against some state and security officials.

“Reports of fraud and intimidation have been received from some areas,” Nuristani continued. “If the offenders are part of the state, we will refer them to the government. If they aren’t, we will identify them and refer them to legal and judicial institutions.”

According to local media reports, army personnel in the Barmal district of Paktika province and the Andar district of Ghazni province forced locals to cast their votes for Abdullah, while in the Hesarak and Dara-ye Nur districts of Nangarhar province, local commanders were said to have filled ballot boxes with fraudulent votes for the same candidate. Supporters of Ashraf Ghani were alleged to have engaged in electoral fraud, as well.

A spokesman for the Independent Electoral Complaints Commission, Nader Mohseni told a news conference the day after the vote that fewer grievances had been recorded than in the first round.

Mohseni said that 275 complaints had been registered from Afghanistan’s 34 provinces, most of them claims of bribery or intimidation. In 29 cases, the complaints involved IEC employees, he added.

One of the most high-profile incidents involved the arrest of IEC Secretary Zia ul-Haq Amarkhel on election day.

“He wanted to commit fraud and we stopped the vehicles,” Zahir said.

Abdullah called for the IEC official to be suspended, but Amarkhel denied any wrongdoing.

“I wanted to transport the materials to centres where there was a shortage,” Amarkhel said, accusing police of obstructing an essential task.

Announcing an investigation, Afghan interior minister Mohammad Omar Daudzai told a news conference, “I believe a misunderstanding has taken place between these two individuals. I have appointed a commission to investigate. We will inform the public of the results later.”

Daudzai insisted that police remained impartial throughout the second-round vote.

“We succeeded in meeting the promises we made to the public. This success was achieved through people’s cooperation,” he said. “We received hundreds of calls from the public during these days, which helped us arrest our enemies and foil their conspiracies.”

The minister said fewer attacks took place than on April 5. However, there were cases where insurgents cut of voters’ inked fingers – a sign they had just been to the polls.

“In the past 24 hours, including polling day itself, 11 policemen, 15 national army soldiers, one IEC employee and 20 civilians were killed,” he said. “We have a number of injured people as well. Also, 60 insurgents have been killed and that number may increase, because we are still receiving reports.”

Confrontations between supporters of the rival candidates’ camps were reported at polling stations around the country.

Aziz Gul, from the Butkhak district in Kabul province, described one argument that he witnessed.

“An armed clash happened between men associated with Maulavi Tarakhel, a member of parliament who supports Ashraf Ghani, and followers of Allah Gul Mujahid, a parliamentarian who supports Abdullah,” he said. “As a result, one man from Tarakhel’s side was wounded and one from Mujahed’s side was killed and two others injured. Also, Maulavi Tarakhel’s men seized vehicles and heavy weapons from Allah Gul Mujahed’s men.”

In Jalalabad, the main city of Nangarhar province, bodyguards of local lawmaker Ghafar were accused of shooting at people who were chanting slogans in support of Ashraf Ghani, killing two and injuring others.

Political analyst Abdul Ghafur Lewal said the second round had been a major success, but criticised some aspects of the performance of the security services.

“Although I thank the security forces for their bravery and courage, there was, unfortunately, more political interference by the security forces in this round. Not only did they interfere, but they also failed to prevent armed individuals who interfered in the process and injured and killed children,” he said, in a reference to the Jalalabad incident.

Lewal also criticised the arrest of Amarkhel, saying, “Interference by the police chief of Kabul province caused thousands of people in the country to be deprived of their votes, and is something that must be taken seriously.”

Despite some cases of electoral fraud, Lewal emphasised that this was not so severe as to undermine the legitimacy of the process.

“The surprising thing this time is that people in unsafe provinces came out and went to the polls. That was something that seemed inconceivable,” he said.

In this two-man race, many voters said it came down to the candidates’ backgrounds.

Kabul resident Safia said she voted for Ashraf Ghani because he was educated and had no history of corruption or bloodshed.

“My husband said that our votes were of no value and that whatever the strongmen and America wanted would happen,” she said. “I still went [to vote] and said it was my responsibility to do so.”

Rahman, a student at Kabul university, said that Abdullah and his supporters had a troubling history of links to past violence.

“They do not have plans or programmes,” he continued. “For this reason, Abdullah got out of attending a debate. What should the nation expect from him, then? Ashraf Ghani is a man of work and action. His programmes are good for everyone.”

Supporters of Abdullah countered that his past association with the anti-Soviet mujahedin qualified him for the job.

“Abdullah is a jihadi,” said voter Abdul Matin. “The people are Muslims and their leader must be a Muslim and a jihadi.”

For other voters, ethnicity played a part in the final choice. Ashraf Ghani is Pashtun, and although Abdullah is half-Pashtun, he is widely identified with the mainly Tajik northeast parts of Afghanistan.

That was what swung it for Sharifa, a resident of Khair Khana in Kabul, who said, “I voted for Abdullah only because he’s Tajik and handsome.”

[Correction: police stopped Amarkhel but did not arrest him. Apologies for this error.]

Pakistan, Afghanistan
Elections
Connect with us