Rising divorce rates may indicate that women are increasingly aware of their rights, although the law is restrictive and unevenly applied.

Rising divorce rates may indicate that women are increasingly aware of their rights, although the law is restrictive and unevenly applied. 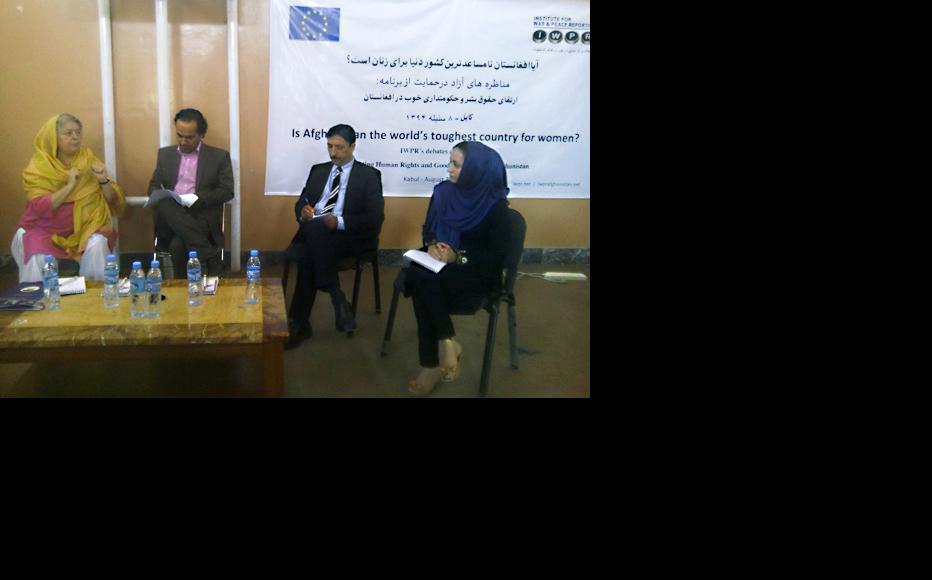 Women's rights discussed in Kabul, August 30, 2015. (Photo: IWPR)
The link has been copied

Lailuma waited to speak to an advisor in the Kabul offices of the Afghanistan Independent Human Rights Commission (AIHRC). She had tears in her eyes, and bruises from a recent beating were clearly visible on her face.

She had come to seek advice on how she could divorce her husband, whom she was forced to marry four years ago, when she was 16 and he was 45. He now beat her daily, and Lailuma said that family life had become unbearable.

“As well as taking drugs, my husband also has affairs with other women and spends his monthly income on them. When I try to stop him from doing things like that, he beats me. I can’t stand this cruelty anymore. I want to get a divorce from my husband, but nobody wants to help me.”

Although it is easy for men to initiate divorce under both Islamic and civil law systems, there are numerous obstacles for women seeking a separation. Conservative social attitudes mean that divorce is seen as profoundly shameful. Nevertheless, advances in rights since the fall of the Taleban government in 2001 mean that women now have greater recourse when it comes to seeking a divorce.

Observers say the situation is slowly changing, particularly in urban areas. Parwin Rahimi, who works on women’s rights at the AIHRC, says the number of recorded cases is on the increase. She argues that domestic violence, aggravated by poverty, is a major factor in marital breakdown.

“Arguments start when a family is in a fragile economic position and the man is unable to provide for his family’s needs and meet his wife’s requirements. This can lead to violence and cause family disintegration,” she said.

Fahim Sultani, legal adviser at the ministry for women’s affairs, said that while poverty and unemployment did contribute to domestic abuse, there were also other deep-rooted social causes for violence against women.

“Unless society is reformed, more attention is paid to people’s livelihoods, and the law is applied fairly to everyone, violence against women is not going to decrease,” he said. “It is violence that causes the disintegration of family life.”

Rahima Rezai, a judge at Kabul province’s family court, sees the increase in divorce cases as a sign that women are more and more aware of their rights, and that public institutions are supporting them.

Imamuddin Musaheb, a lawyer, explained the circumstances under which Afghan civil law allows a divorce application.

“If the husband is suffering from a chronic, incurable disease, if he is unable to feed his wife or if he is absent for over three years for reasons unknown, a woman can then get a divorce,” he said. “Otherwise she can’t.”

Islamic law also sets out many constraints. Maulavi Keramatullah Sediqi, head of Islamic studies at the ministry of hajj and religious affairs, listed the circumstances in which a woman could get divorced.

“From the perspective of shariah, a woman can get a divorce if her husband agrees to it; if the husband is unable to feed his wife or has a long-term, incurable disease; if the husband forces the woman to perform immoral acts; if the husband takes a lengthy trip against his wife’s will or without her knowledge and does not support her financially in his absence; and if a husband refuses to sleep with his wife for four months. Then she has the right to divorce him,” he said.

Sediqi emphasised that while divorce was permitted by Islam, it was very much frowned on. He blamed rising rates of divorce on the influence of popular culture.

“The broadcast of vulgar foreign serials on private television channels has had unpleasant impact on Afghan social attitudes. People consume these soap operas unthinkingly,” he said. “The messages they send go against the culture and tradition of our society, and this leads to family breakdown.”

This view was dismissed by Masuda Karukhi, a member of parliament from Herat in the west of the country. She says misogyny is deeply-rooted in Afghanistan, and point to a law on the elimination of violence against women that was passed by presidential decree in 2009, but was then rejected by parliament in May 2013. It has been shelved ever since, with conservative parliamentarians claiming that it contradicts sharia law. (See Tackling Gender-Based Violence in Afghanistan.)

“A hatred of women is still part of the male belief-system,” she said. “Since politicians opposed the law on eradicating violence against women and wouldn’t allow it to be passed by parliament, how can we complain about [external influence from] others? That was an example of home-grown Afghan misogyny.”

Azita Rafat, deputy chair of the Truth and Justice Party, argues that both the making and implementation of laws in Afghanistan have been dominated by men for decades.

“Women demanding divorce is, in a way, a way of fighting for human rights,” she said, contrasting this with the default position of “putting up with psychological pressure, behaving as slaves, being seen as second-class, being insulted and ultimately remaining silent”.

“The violence used against women in various areas of life is proof that our laws on women’s rights need reform,” she added.

Some complain that even the limited divorce rights that women are allowed under civil and religious law are not upheld.

Nasrin, 17, a resident of the Jaghori district in Ghazni province, came to Kabul to file for divorce. She said that as her husband was impotent, she had the right under both civil and Islamic law to demand a divorce. So far, he had not agreed.

“Although I have a legal right to a divorce, the courts and women’s rights institutions in Jaghori district would not help me. I came to the AIHRC to get help from them, but it seems that no one here is going to help me, either,” she said.

Family court judge Rezai said that women frustrated by the lack of action on their cases often did not realise that the courts might be powerless to act.

“The law does not allow us to fulfill these women’s demands; we are unable to go beyond the limits of the law,” she said.

Musaheb, the lawyer, said the legislation governing divorce for women needed a major overhaul, although he too advises women to seek legal advice before going to court.

Meanwhile, many women remain in a kind of limbo, unable to resolve their situation.

Nahid, 29, said her husband used to hit her on a regular basis, but one day she was beaten so badly that she lost consciousness and relatives had to take her to hospital. After that, she said, “My husband took my four children to his mother’s home. He has been missing for the past two years. When I approached legal institutions to file for divorce, they told me I could not do so unless my husband was found.”

Complaining that women’s rights groups had been no help to her, she asked, “How long must I remain without a future? If this counts as law and justice, then to hell with it.”

Mina Habib is an IWPR contributor in Kabul.